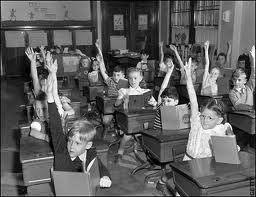 The original St. Matthew School was built in 1914, thirteen years after the church was dedicated. It was an impressive building with two full stories and a cupola with a cross on top, and a full daylight basement. There were two large classrooms: the "Big Room" housing the four upper grades, and the "Little Room" with the four lower grades.

The Sisters of St. Mary of Oregon had been teaching weekly religion classes in the parish, and now became the school's first principal and classroom teachers. In its first year of existence, there were 45 children enrolled. The school continued to grow in number and soon classrooms were being set up in the second floor parish hall. Some classes were even held in the Knights of Columbus hall across the street. For 30 years the school was heated with a wood furnace, and children were responsible for daily housekeeping chores.

In 1949, a new St Matthew School was built around the old one. One floor was taken out of the old school and it was used as a gym until 1974. At that point the gym was torn down to make way for a new parish center. 1989 again brought changes to the school when a beautiful double space was added for the Kindergarten class. In 2011, the Preschool program began and was able to take over the former parish center, now known as the Costelloe Center. With great support from the Parish and community, a state-of-the-art Science room was added in the 2015-16 school year. To this day, St. Matthew continues to grow and change, ever respective of and honoring those who came before in our 100+ year legacy.